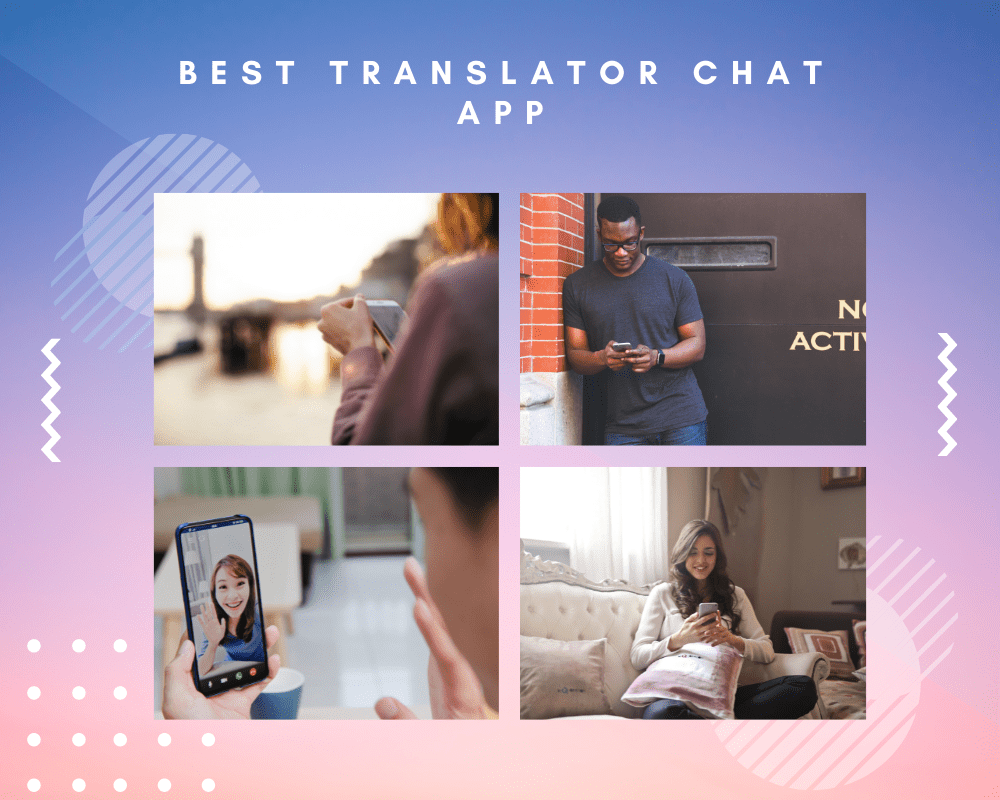 Communication is essential no matter where you are in the world. And having a chat app with translator capabilities is essential when communicating with people from different countries. So, whether you’re traveling or want to chat with friends and family from other countries, here are the best chat apps with translator capabilities available today. These chat apps help you to talk with strangers without any hurdle.

There are numerous chat apps available on the market, but which one is the best? The answer to that question is dependent on what you want in a chat app. If you want an app with a translator, we listed top chatting apps with built-in translator:

Slatch is by far the best option for chatting apps with translator capabilities. Slatch has an easy-to-use interface and provides real-time translation of user conversations. Furthermore, there are no limits to the number of people who can join a group chat, making it the ideal option for gathering everyone in your family or group of friends at once. 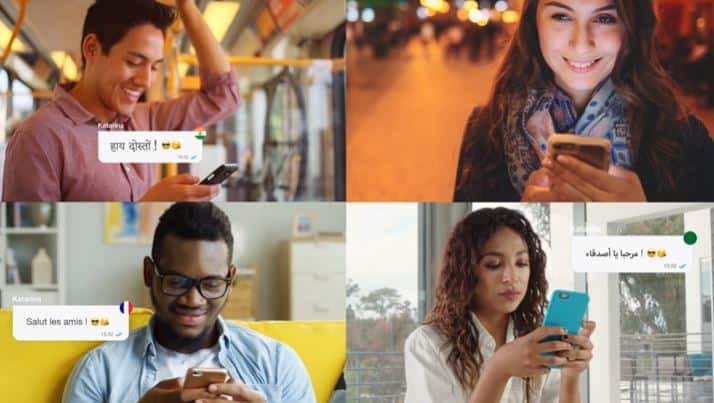 Slatch is a free chat app for iOS and Android devices that promises a “new era for messenger” with a simple design, an intelligent AI assistant, and the ability to communicate in over 30 languages. As a result, Slatch is one of the best messaging apps with translators available.

Transkey is a fantastic chat app that allows users worldwide to communicate with each other without any language barriers! This app is extremely useful for those who do not speak the same language as others or have difficulty writing messages. The app includes an in-app translator that can translate messages between two languages. This is ideal for travellers or those who want to communicate with people from other countries. 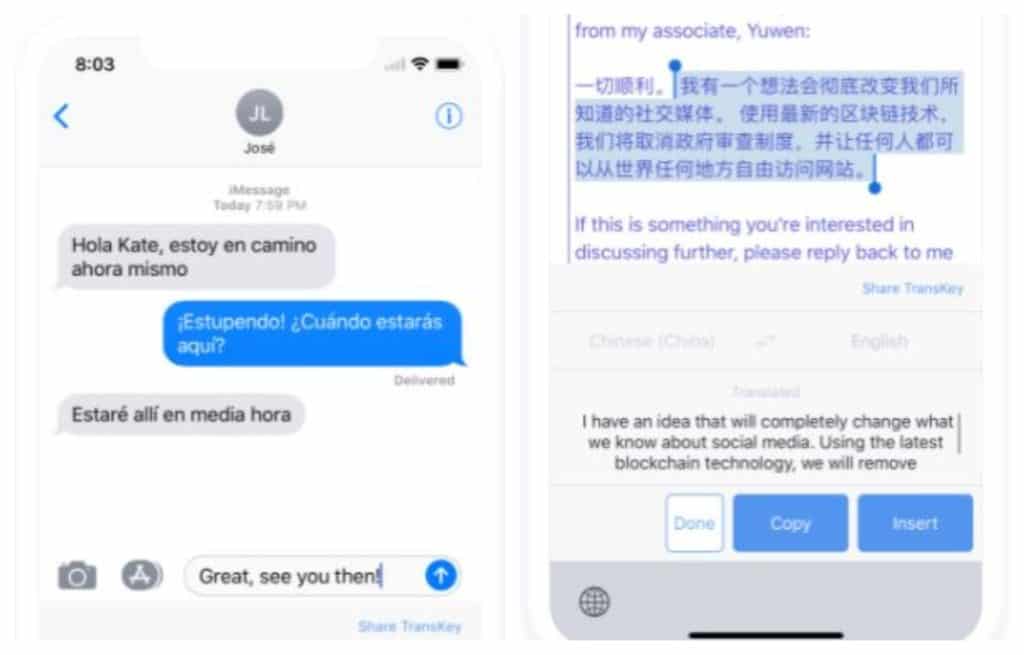 The app instantly translates whatever you type in your language to the target language. Whatever other users type in another language is directly translated into text or speech so that everyone can understand it. This provides anyone with a one-of-a-kind communication experience, even if they do not understand each other’s languages!

The app is currently available for free on the App Store but you can buy monthly or yearly subscription.

Viber is one of the world’s most popular chat apps. It has many features, such as voice and video calls, group chats, and a translator. Let’s look more closely at Viber’s translator feature. 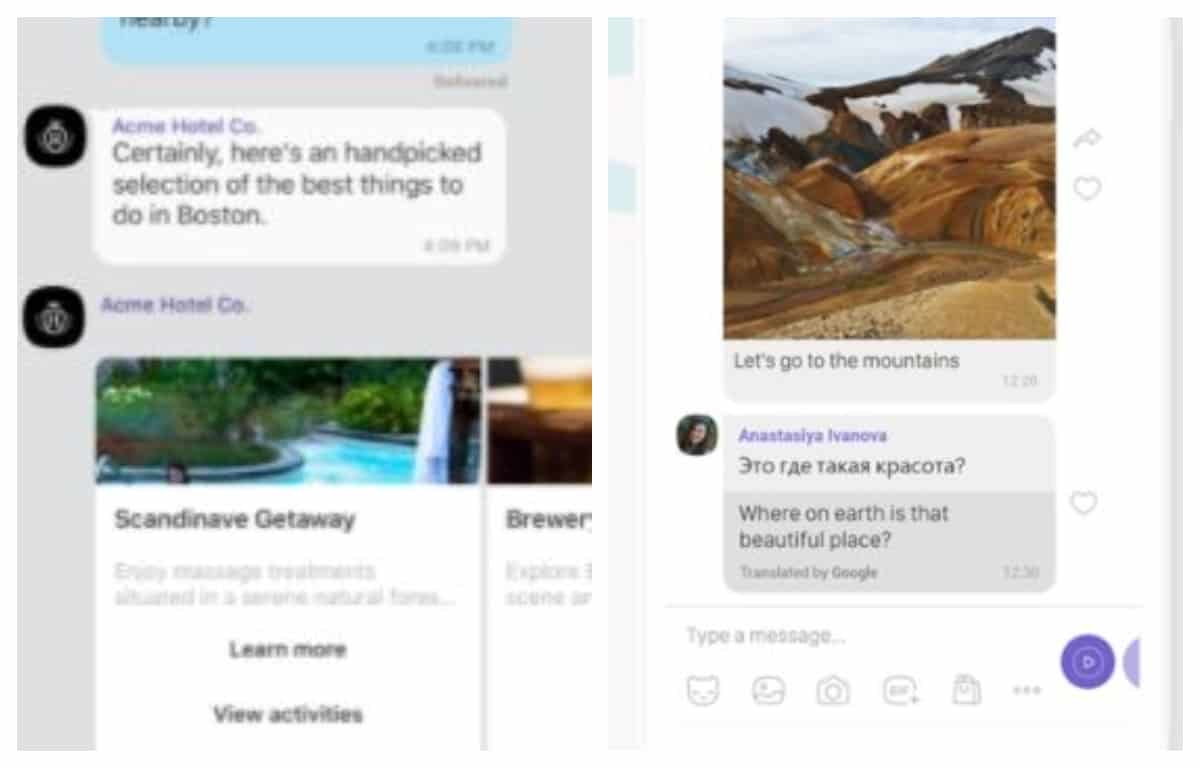 Both voice and text messages can be translated using a translator. It has the most language support of any chat app, with 50. The translations are remarkably accurate and quick. You can even use the translator offline, which is useful if you’re traveling abroad and don’t have access to the internet.

Viber is free to download and use. There are no in-app purchases or ads.

Skype is a global communication app that includes a free Skype Translator feature that converts your voice and text to another language.

Skype was acquired by Microsoft Corp. in March 2016, introducing new features evolving ever since. The personal user interface was simplified in the most recent update, and the design tools for chatting were improved.

The Skype Translator is a tool for translating voice and text that appears as an add-on in your conversation window when you start a chat or make a call. You can turn it on and off at any time depending on your needs: if you want to write a message in a different language without talking to someone from another country, this function will serve you well; however, if you speak a foreign language and want to converse with someone who doesn’t, it may not work so well – because the Translator is still in beta mode. 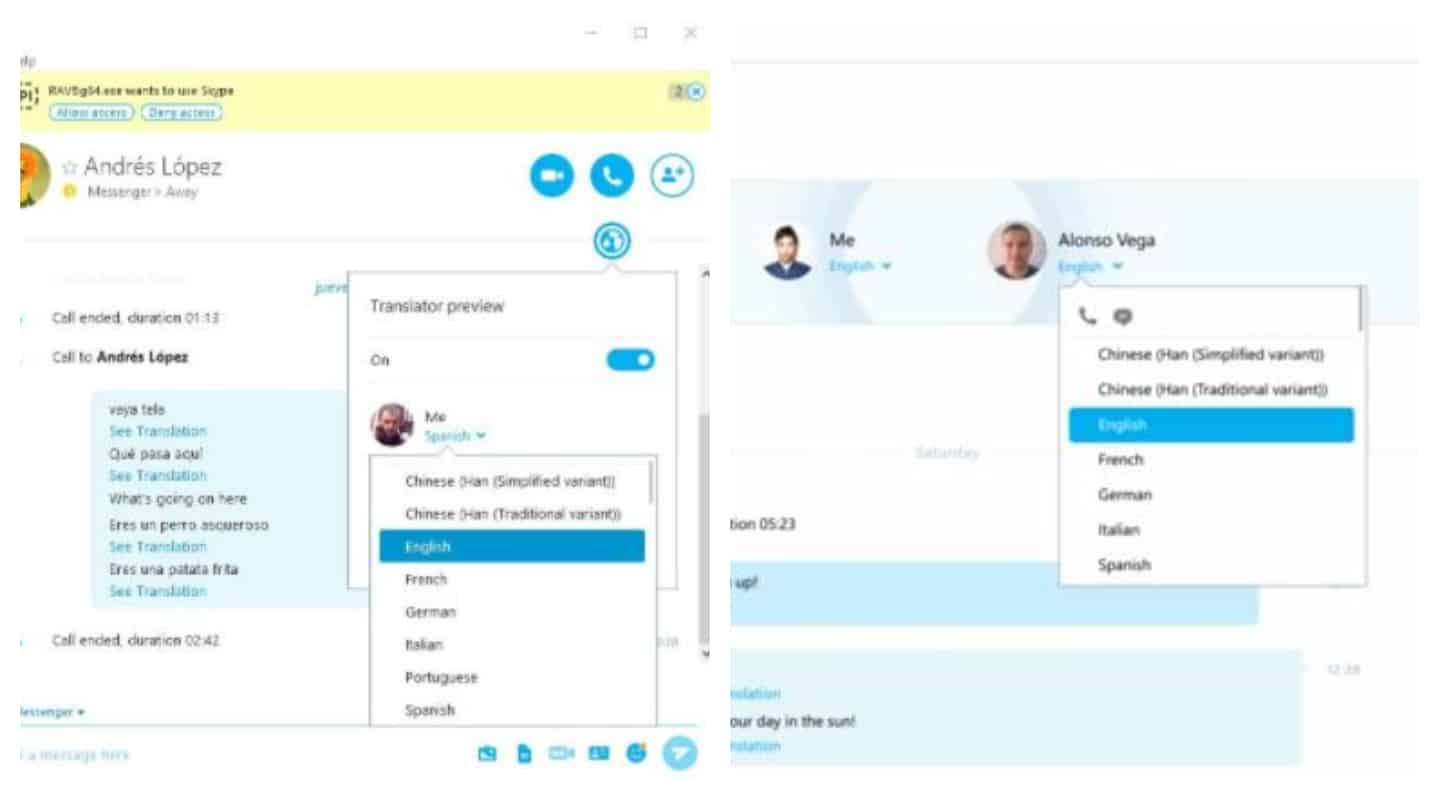 Although the translation is done in real-time, you should be aware that the quality of the translation is not always perfect. If you need to communicate with someone from another country, the app will automatically translate as many languages as possible for each conversation. It’s worth noting, however, that some languages (such as Spanish and Portuguese) have multiple dialects, so make sure you use the correct one when using the Translator.

Skype Translator is free to use.

The translation is an essential part of our daily lives. It’s no surprise that we keep hiring agencies and translators to do our translations when we can’t do it ourselves. However, with today’s technological advancements, some services allow you to translate faster without hiring people or using any software. One of them is Facebook Messenger Translator. 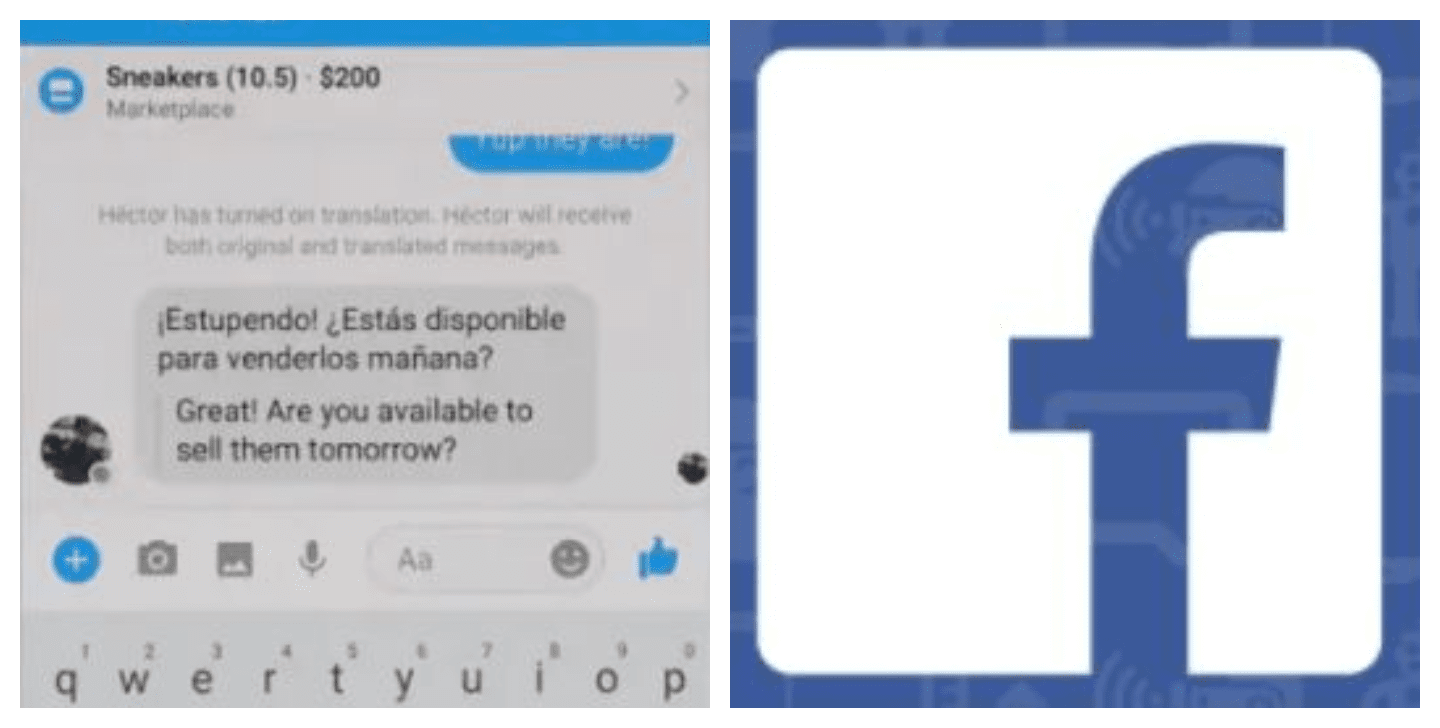 There’s no need to download anything or copy/paste your text onto a website; all you have to do is type into your Facebook chat window and press enter! You can now instantly translate languages without leaving the chat window in Facebook Messenger. This improvement over the previous language translation was only available on Business Pages in 2015.

Facebook Messenger Translator is available for free. There is no need to download anything or copy/paste your text onto a website. It is compatible with both Android and iOS devices.

Wechat is a messaging app that includes a translation feature, ideal for communicating with people from other countries. The app is available in English and Chinese, making it ideal for users who want to learn Chinese or practice English. WeChat also has a plethora of features, such as voice and video calls, group chats, and the ability to share photos, videos, and location data. 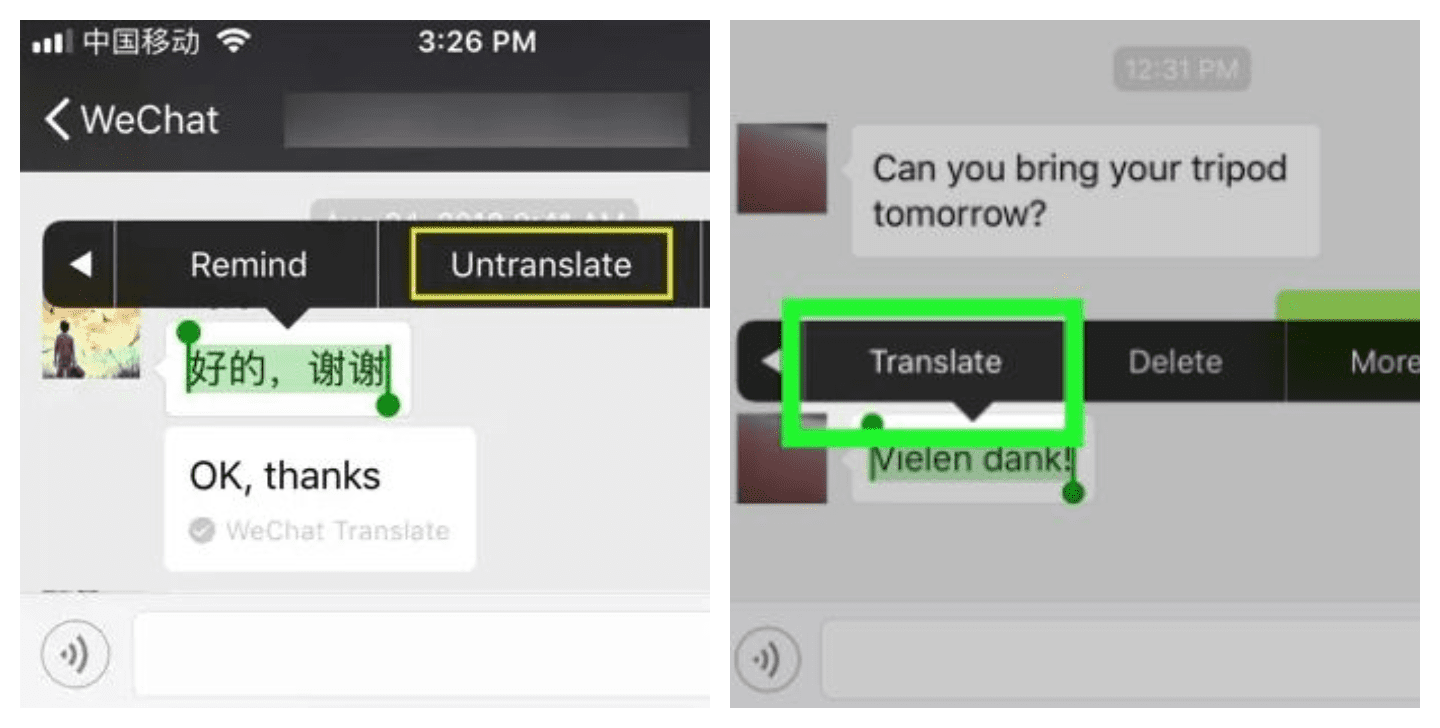 Wechat is free to download and use, but some features, such as voice and video calls, are not available in all countries.

The best chat apps with translator capabilities are available to help you communicate with people from different countries. So, whether you’re traveling or want to talk with friends and family who live in other countries – there is a great app for that! We hope this article has helped you find the perfect tool for your needs. And remember, always be respectful of cultures when chatting online!

Is there a messaging app that automatically translates?

How do I translate incoming text messages?

The Transkey application will open and translate it for you when you receive a new text message. A pop-up window at the bottom of the screen will display the translated text. You can then choose to respond to the text message in your preferred language or the original language.